Over the past six months Ilonka Marselis wrote her Master thesis at Drift under supervision of Flor Avelino for the master program Industrial Ecology, a research field aimed at sustainable development. Looking back at her experience at DRIFT, Ilonka wrote this blog, to offer a preview of her research on Dutch Ecovillages.

To my regret, Industrial Ecology is mainly focused on top-down and technology driven innovations. I believe in the importance of bottom-up innovations as well as social innovations to sustainable development. I also think ecovillages offer relevant experiments and knowledge for sustainability transitions. This led me to write my thesis on Dutch ecovillages with Flor, since she has a history with both social innovation and ecovillage research. I had a great time studying at Drift, I learned a ton about transitions and felt very welcome in their group of driven action-researchers.

To answer my research question: “How do Dutch ecovillages envision and practice sustainability transitions, and which tools for communication, collaboration and decision-making are used to realize their community ambitions?” I performed a multiple case-study on five Dutch ecovillages. I developed an analytical framework mainly based on the transformative social innovation framework that is developed in the EU research project TRANSIT which Drift is coordinating. I studied ecovillages as social innovation initiatives and qualitatively assessed their transformative impact on the social context with the levels ambition, potential and impact. I added to my analytical framework some elements from other vision and narrative literature. I understood the influence of a vision and narrative on the actions with the functions: inspiration, motivation and direction. I studied the feedback between actions, narrative and vision with the aspects: interpretative flexibility and adaptive capacity.

I chose five ecovillages based on an overview of ecovillage initiatives provided by the Dutch ecovillage network. I selected: IEWAN, a straw bale apartment complex in Nijmegen, housing roughly 50 inhabitants and built in collaboration with a housing association. Ecodorp Bergen, an ecovillage on a former military terrain, having around 10 official members and currently trying to get permits to live on site. De Hobbitstee, a living community initiated in 1969 in Wapserveen, currently housing around 9 adults and 6 children. Ecodorp Boekel, an ecovillage housing around 15 people in temporary houses that plan to start construction in the spring of 2017 in collaboration with many innovative partners. Vereniging Aardehuis, an earthship community in Olst housing around 43 adults and 34 children in privately owned earthships. 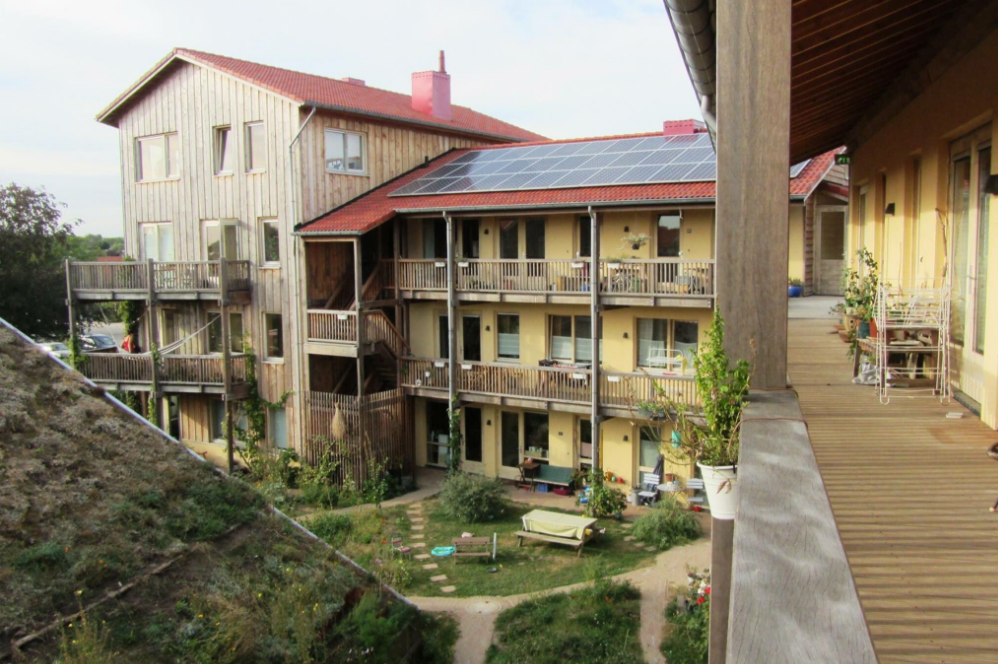 In each case I interviewed two inhabitants to get answers to four sets of questions which I developed based on my analytical framework. The first set of questions was on their organizational structures and decision-making methods. I discovered that the ecovillages have different organizational structures, amongst which sociocracy and holarchy. These are both governance systems, where holarchy is a bit more goal-oriented than sociocracy and has a clearer division of responsibilities. The cases used two different decision-making methods, either consensus with unanimity or consent. They ascribed similar effects like more equality, effectiveness and transparency to their systems. Negative aspects they mentioned were difficulties of living up to their structures and meeting practices as well as remaining power issues and peer pressure, on top of needing certain skills and patience.

My second set of questions was on communication and collaboration tools that are used. The two most used communication tools were a facilitator in meetings and a positive communication method called non-violent communication. To both methods effects like equality, peace, effectiveness and better communication were ascribed. I also studied tools for self-development as some of the cases stated that their high levels of collaboration and good communication were in part the result of these tools. For self-development they have in these cases regular gatherings and workshops like a heart circle or using the core quadrants of Ofman. Other cases did not work on self-development at all. Those cases believed this was something that had to be left up to individuals and would make people uncomfortable. Lastly, I looked at tools for group connection. This is also practiced on different levels by the cases, some have regular group activities or even workshops to increase group connection. Others have few to no activities in place. 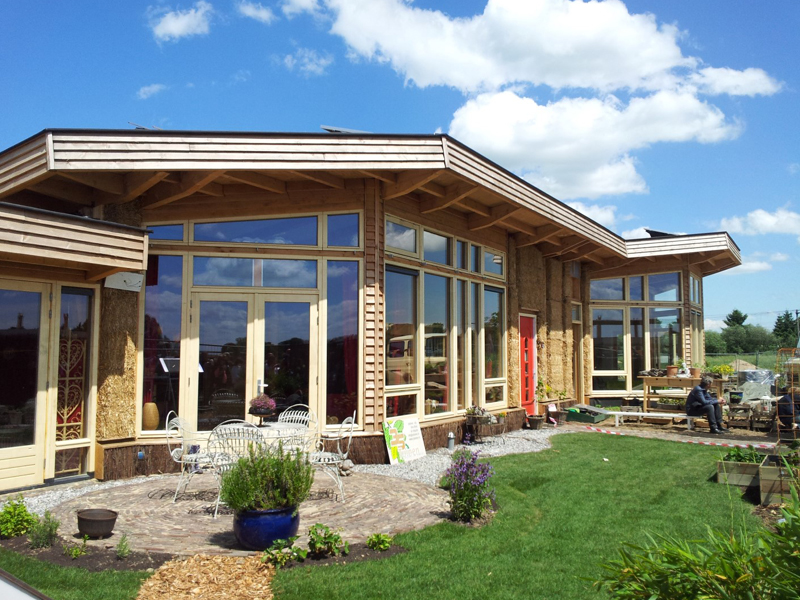 The  third set of questions dealt with the narrative and vision of the cases. The first thing that stood out about their visions is that the cases have two different emphases on otherwise quite similar visions. Some focus more on building sustainable houses, where others primarily focus on living in a group as a harmonious community. The visions all follow quite directly from their narratives. I discovered that the vision played three different roles in my cases; either 1) included in the procedure for making a proposal, 2) included in the checklist for a good objection to a proposal and 3) not included but playing an unconscious role. All functions motivation, direction and inspiration occurred in the cases in various forms and levels. Lastly, the development of the vision happened in two distinct ways; 1) developed by the initiative holder before looking for a group, not open for change or 2) continuously evolving with new group members or experiences, creating much interpretative flexibility and change.

My last set of questions covered the transformative impact levels the cases ascribed about themselves. All but one of the cases said to have transformative ambition either explicitly in their vision or implicitly in their actions or statements, only the Hobbitstee did not intentionally want to change or inspire other people. All cases ascribed transformative potential to their initiative, stating that they are performing experiments (both social and technical) that can provide relevant knowledge, function as kick-starter to other innovative companies or that they are able to inspire many individuals to change their lives towards more sustainability. Some cases view they have had actual transformative impact, in the form of their decision-making method or organizational structure being copied by other organizations, similar projects being initialized in their surroundings or local governments and housing associations being more open to collaboration with citizen-initiated projects. 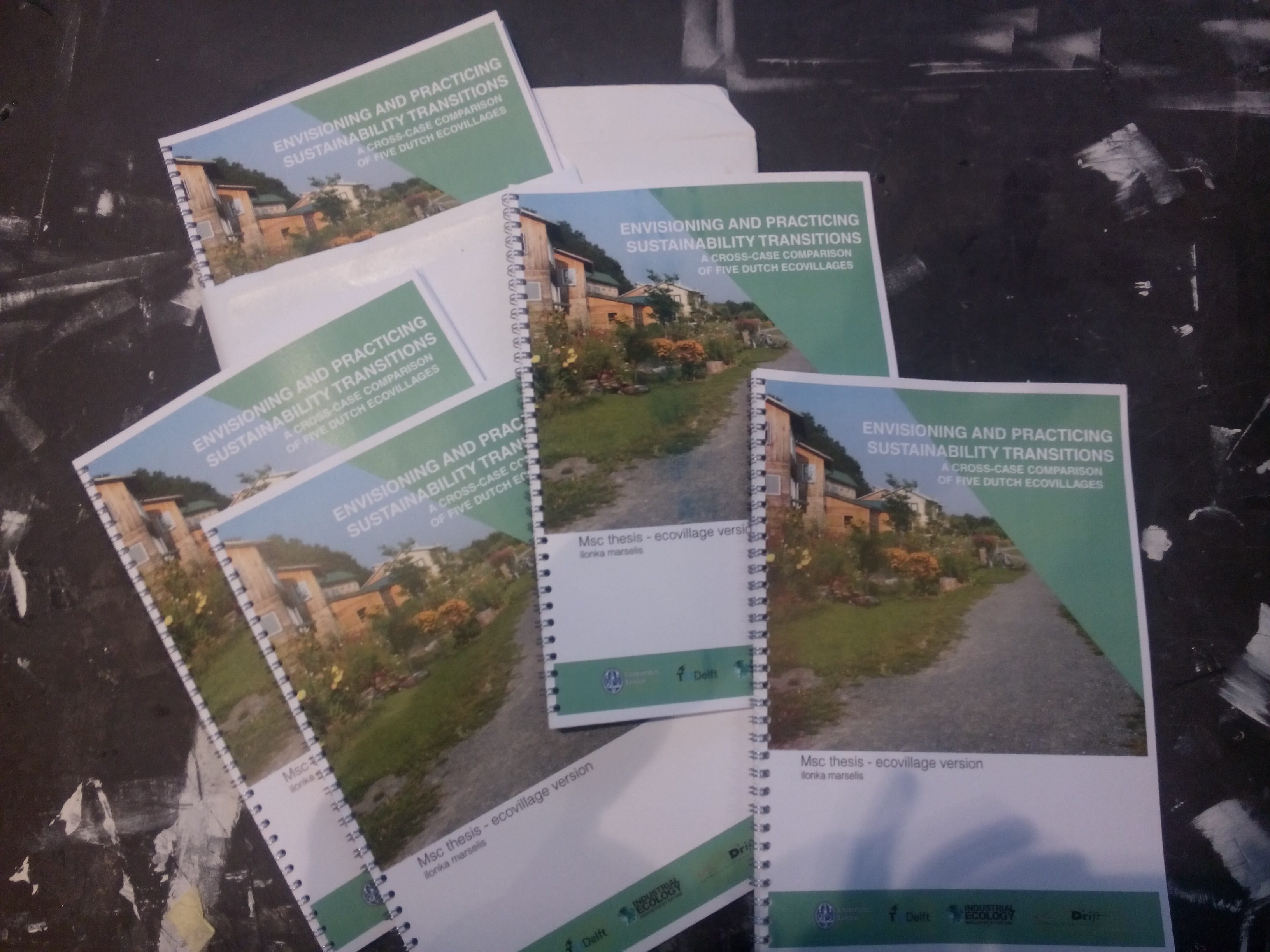 In my discussion I redeveloped an existing framework to study aspects to community governance. In my redeveloped framework I, amongst other things, made a clear distinction between communication skills and process skills, and I subdivided each of this again in different types of skills. I also discussed the larger scale implications of my empirical findings to sustainability transitions. I mainly noted that ecovillages can serve as experimental ground from which other actors in society can learn and take inspiration from.

I wanted to disseminate my research results in such a way that ecovillages themselves could also make use of the information I had gathered. I therefor presented my preliminary findings and guided a discussion on topics of my research at the annual Dutch ecovillage network event. On top of this, I made an ecovillage version of my thesis which includes an extra preface and a chapter with discussion points so the ecovillage can link the data and findings in my thesis to their own initiative. This version is now published on the website of the Dutch ecovillage network.

Working on my thesis was a lot of fun and I gained a lot of inspiration from interviewing ecovillage inhabitants as well as from talking to all the people at Drift and hearing of their projects on transitions in all areas of society. I want to thank them for providing me with the opportunity to graduate at Drift and helping me along the way.