Seven and a half years ago, Flor Avelino and Marijke de Pous co-founded the Transition Academy as a platform to empower people to think and act for radical change. Dozens of courses and thousands of students later, the close of 2020 saw both of them moving on to new challenges. With the Transition Academy entering a new phase with Marieke Verhagen and Serf Doesborgh at the helm, it’s time for Flor and Marijke to take stock. In this piece, they contemplate the becoming of the Transition Academy, tease out its radical and transformative core and close with some questions for the future.

Where did we begin? A story in two voices.

Flor: The way the Transition Academy started, was in a typical DRIFTy spirit of (co-)creation, experimentation and learning by doing. There was an urge within DRIFT to share and teach transition thinking and approaches, an observed need in society for transformative thinking and a concrete demand for (more) transition education. I fantasized out loud about a Transition Academy and Derk and Jan and other DRIFT seniors constructively supported the idea. Very soon after Marijke joined us as ‘Transition Academy coordinator.’

Marijke: On a very personal note it was this amazing synchronicity. After having graduated and worked as an artist and then studying philosophy, I found myself hungry for something quite different. I imagined a working environment with smart and creative colleagues, collectively working on something that was socially relevant and concrete. When I came across the vacancy to help start up an Academy at DRIFT, it instantly sparked a flame. I remember just how thrilling the interviews were and how determined I was to be the one to take this position. For me the flame at that very beginning was one of creative potential. I carried that forth into my work at DRIFT and still see it as a defining characteristic of the Transition Academy.

Academic Social Entrepreneurship
Flor: Amongst the increasing demand for transition education, was a particular social entrepreneur’s request to attend a course paying for it ‘in kind’ by bartering. Not being able to respond to that request within the existing educational structures of the university, further fueled our desire to be able to offer ‘our own’ education, on our own terms.

This desire was also grounded in DRIFT’s trajectory within the Erasmus University of Rotterdam. After having had to leave the faculty in 2011 and several failed attempts to collaborate on education, it seemed near impossible for DRIFT to be integrated in the accredited education system. The Transition Academy was a way to start our own education in the spirit of academic social entrepreneurship. In other words, the ability to combine education with academic research, entrepreneurship and activism.

Think Act Change
Marijke: Starting the Transition Academy was about being able to include and support people wanting to learn for and about societal change. We aimed to create enabling learning environments that would allow people to learn from and with each other, and gain new competences for tackling transition challenges. There was also a sense of urgency: these skills and competencies are important, they are needed and they are often lacking. Thus our tagline and learning philosophy was born: “empowering people to Think and Act for radical Change”.

Transdisciplinary collaboration
Marijke: When we founded the Transition Academy, it was also very much about creating a place or platform that could bring together experts and practitioners in the wider field of transitions. We started out with a separate visual identity and website from DRIFT in order to open up that space. Over the years, it became clear that being an integral part of DRIFT was in fact a core strength of the Academy, as well as for our partnerships. That is why we choose to integrate the website and visual identity of the Transition Academy into DRIFT’s in 2018, highlighting the strong interconnections between our action research, education and consultancy work.

Flor: Transition Academy’s mission and philosophy are intimately intertwined with DRIFT as an institute for action research. In a way, we invite each of our students to become action researchers in their own fields. Here reflection and knowledge are not merely instrumental for action. By being involved in what we wish to study, experiencing in addition to merely observing, we can greatly improve and deepen our understanding of each other and the world.

Nurturing potential: the co-evolution of people & organisation
Flor: Working with the enthusiasm, passion and inspiration of others was core to the development of the Transition Academy. Every time somebody was passionate about transition learning, whether it was a teacher, a facilitator/organizer or a student, before, during or after a learning trajectory, they were shaping and making the Transition Academy.

Marijke: I totally agree. For me the Transition Academy has always been about working with the ideas, capacities and talents of others and creating a place in which these could take shape in learning environments. In my role as director, I sought to align the strategic development of the Transition Academy with the interest, passion and ambition of my colleagues as much as possible. From the start people have been at the heart of Transition Academy’s becoming.

Trust & tension
Marijke: I remember how excited I was about being able to work with Flor. Her passion for teaching and abilities as a teacher were very tangible to me, especially in those first years when we worked closely together. From my studies in philosophy I knew the magic of being stirred and changed by new insights and learning, and could see it happening in myself and others during her classes. This certainly was an inspiration to me when developing the Transition Academy – something that I could count and build on. In a similar vein, Mees Schouwenaar, who was a part of the core team for many years, was hugely influential in shaping our practice with regard to hosting learning journeys. She brought a deep engagement with participants and all aspects of their learning process and a keen eye for the well-being of colleagues.

Flor: Looking back, I would say there has always been a certain tension between the creative energy that drove Marijke and myself on the one hand (including a desire for aesthetics in language and visuals), and the need to make the Transition Academy viable within the overall business logic of DRIFT on the other.

Basic trust and shared values made it possible to navigate professional insecurities and organizational tensions encountered along the years. While not always comfortable, it might in fact be one of the flames that kept the Transition Academy going as part of the social enterprise that DRIFT is. The continued presence of some tension and of basic trust may have propelled us forward and I think it continues to give energy and inspiration. 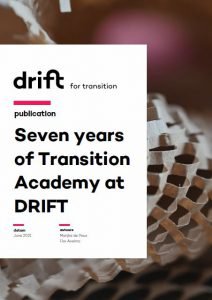