The discourse of #socialinnovation tends to be based on a belief in human agency to change the world for the better. The more ‘dark’ and ‘unintended’ effects of social change tend to be underplayed, including the power struggles and inequalities that come with it. However, addressing power is a necessary condition to empower people to have transformative #impact. On the 17th of May, 27 critical thinkers and doers gathered in Amsterdam for a two-day workshop, organised by DRIFT and the Social Innovation Community, to discuss the role of power and empowerment in social innovation. In this blog, Flor Avelino, Sarah Rach and Julia Wittmayer share their main insights. 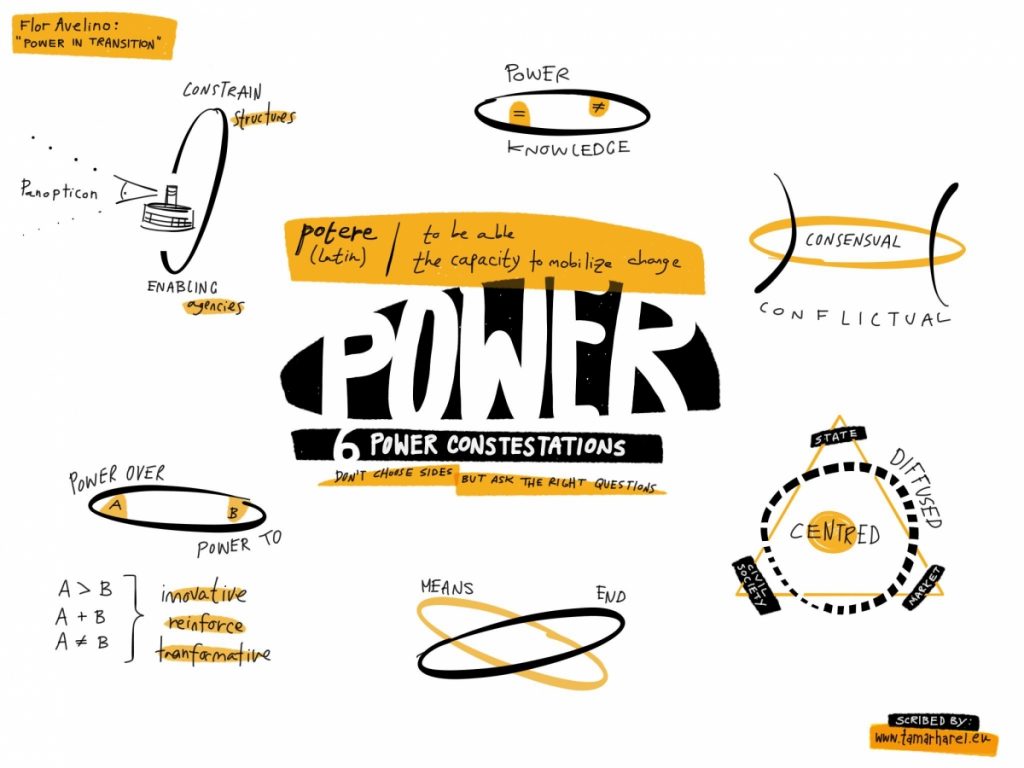 Social innovation is political, or at least it should be
#Socialinnovation is inherently political. Or at least, for social innovation to be transformative, it has to engage in politics in the sense of challenging existing institutions and norms, (re)negotiating new rules and decision-making arrangements and shifting existing power relations. We refer to politics in a broad sense of (reclaiming) power. Such politics is not only about voting or about engaging in public debates, it also manifests as people produce their own energy, envision alternative futures, reshape places, participate in decision-making and frame their own rules.

One example of a social innovation that engages in politics is that of participatory budgeting as practiced in the Indische Buurt in the East of Amsterdam. Participatory budgeting refers to a movement in which participants get more directly involved in deciding how local governments spend their public money. In the case of the Indische buurt, budget monitoring enables citizens to develop financial literacy, hold their local government accountable as well as formulate neighbourhood priorities from a citizens’ perspective. The method of “district tendering” (as explained in this video) enables the local government to not only take account of these neighbourhood priorities, but also to involve local residents and entrepreneurs in organising services and facilities in their own neighbourhood, rather than outside parties taking over (as often happens in public-private partnerships).

Critical questions about power and unintended consequences
Social innovation and empowerment remain meaningless and superficial if underlying power inequalities are ignored. To go a level deeper, everybody should ask critical questions about power. This is easier said than done, however, because power is one of the most contested concepts in social and political theory. Definitions and manifestations of power are manifold and highly diverse, which makes it difficult to grasp. However, rather than falling into the trap of a highly philosophical debate about different interpretations of power, it is about utilising different concepts of power to ask critical questions about how power plays out in processes of social innovation.

Many power implications of social innovation are unintended. As such, talking about power also means thinking about unintended consequences. Reflecting on and learning from unintended consequences may in itself already be a way to deal with them and possibly avoid them in the future. It is our duty as social innovation researchers and practitioners to address power issues and to critically reflect on potential negative impacts.  For instance, an unintended side-effect of social entrepreneurship may be political discourses that use examples of social enterprise to dismantle public services or to justify budget cuts. Regardless of the intentions of a social entrepreneur, his/her ideas and practices may be (ab)used to legitimise certain political discourses that might countervail the original social purpose. This does not in anyway discredit the value of social enterprise in itself. Rather it is about openly discussing the potential unintended consequences and possible strategies to deal with them.

Translocal social movements can empower collective action for transformative change
Challenging existing power structures and contributing to transformative change requires collective action by a critical mass of people. Across the world, many people empower themselves to contribute to social change by getting involved in social movements. While some social movements tend to focus on protest and resistance, prefigurative movements(as conceptualised by Lara Monticelli) conduct real-life experiment with their desired alternative futures, developing and implementing social innovations in their own contexts and as such ‘prefiguring’ what a society could look like in the future. Examples of prefigurative movements include the participatory budgeting movement as introduced above, the global ecovillage movement, the ‘makers movement’ (as manifested in e.g. Fablabs or Hackerspaces), the food sovereignty movement as advocated by the seed exchange networks or  La Via Campesina and many other examples (see here).

One of the things that these movements have in common is that they are translocal: globally connected and locally rooted. By being involved in such movements, people become more embedded in their local context, while also gaining more connections across the globe. Such social movements do not only provide access to physical and financial resources but also psychologically empower people to gain a sense of autonomy, competence, belonging and impact and both local and global levels. For such social movements to have transformative impact, they too have to deal with issues of power and politics. How and to what extent do these translocal social movements manage to involve governments and enterprises? To what extent can they exercise countervailing power to challenge the vested interests of powerful multinationals and intergovernmental agreements?

Participatory methods to embody, visualise and experience power dynamics
During the workshop in Amsterdam, Luc Opdebeeck from Formaat guided an interactive session with the participatory drama approach ‘Theatre of the Oppressed’. This enabled us to have an embodied experience of power and empowerment, by seeing, feeling and acting out power dynamics with our own bodies. It included acting out issues of exclusion, oppression and inequality. It became clear that in order to understand, grasp and feel power enough to want to change it, conceptual discussion is not enough. We need participatory methods to embody, visualise and experience power dynamics. As such, empowering social innovation and addressing issues of power is also a matter of socially innovating the very way in which we communicate about power.

Writing about Empowering Social Innovation for Transformative Change
On Friday the 18th of May, some participants of the workshop reconvened for a ‘writeshop’ in which we challenged each other to distil our ideas on and experiences with power and empowerment in social change into a sharp piece of writing. The writing workshop was facilitated by Frank van Kesteren from The Broker Online. A delicate topic like power makes it all the more important to ask: who is your intended audience and what is the best form to describe the power relations that come into play? Three of the written articles were edited and published by The Broker Online:

The drawings in this blog are scribed by Tamar Harel: Process Design and Visual Representation

This blog was published earlier on the website of the Social Innovation Community.